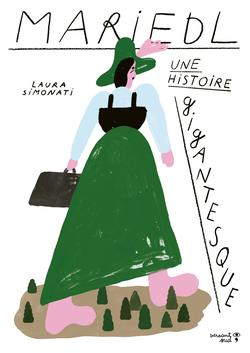 What the jury said:

An unusual story about being unusually big. Inspired by a true story from the rural Sud Tyrol in the 19th century, the gigantic protagonist moves from invisibility to visibility on a physical journey that parallels her journey to self-acceptance. The impressive printing technique using an anti-technicolor approach and mixing of brown, dark green and pink creates a down to earth, grounded feeling throughout the book, and the naïve folk-art style painting is very modern in it’s approach. The interplay between the painted images and hand lettering, presented in a sequence of double spreads each with an original layout, enables the reader to share the story from a personal point of view. This is a strong debut, and we would like to commend the bold selection of subject matter and upcoming artist. 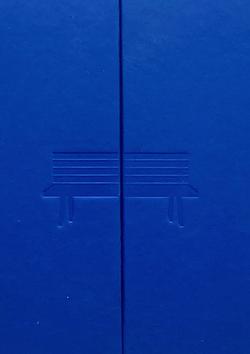 What the jury said:

You never know who will sit next to you when you are on a bench! This understated french door structure is like a stage with two small booklets inside, facing one and other. This design deals with two possible story lines that encounter one and other - people, objects, and landscapes all change to make a total of 121 scenes. The special monochromatic nature of the book makes the reader focus on the unique format and creates a lingering attachment to the book. This creative design layout creates a story that starts with the individual and evolves to culminate in a group gathering and a community panorama.