10 Year of the International Award for Illustration

Created in 2010, the 2020 International Award for Illustration Bologna Children’s Book Fair-Fundación SM celebrated its 10th edition. The aim of the prize, announced during the Bologna Children’s Book Fair, is to discover talented children’s book illustrators chosen by a special jury of three experts from among the artists under 35 included in the Illustrators Exhibition. The winner is awarded a scholarship ($ 15,000) and asked to create a picturebook based on a classical tale or legend from his/her own country: a process that helps the young illustrator evolve professionally, expressing his/her full potential on the international stage. The following year, the book is published by SM and presented at Bologna Children’s Book Fair, where the original illustrations are shown in a solo exhibition dedicated to the illustrator. Throughout its ten editions, the award has brought to the international stage brilliant young artists from Asia, Europe and North America. The exhibition celebrating its tenth anniversary will display a series of works by the ten winning artists who have shaped the history of this important award. 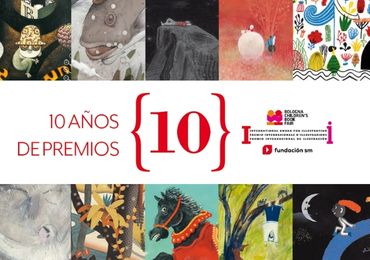